With ski season beginning, many of us have all the best intentions of attending “ski conditioning classes” and getting in “ski-shape,” but still find ourselves with shaking thighs on that first long run and are barely able to walk down the stairs the next. If you don’t have time for a full ski-conditioning workout and just want a few exercises that will give you the best bang for your buck, stay tuned on Wednesdays for the next couple weeks to this blog.

Today’s exercise is called the “Lunge Progression.” This exercise progression was featured in this month’s Journal of Orthopedic and Sports Physical Therapy as a way to address strength and movement deficits associated with ACL injury (to access this article: http://www.jospt.org/doi/abs/10.2519/jospt.2013.4693#.UoOfLIWyxBk). “Valgus collapse,” as described in yesterday’s post, is a common movement impairment that is one of the primary predictors of future ACL injury and re-injury.  The lunge progression helps to correct this movement impairment by utilizing the hip abductors and external rotators to control the frontal plane motion of the knee.  Ideally, the knee should act as a hinge joint in the sagittal plane, and not have much frontal plane motion (this is the plane parallel to body), and when it does, injury is more likely to occur.

The first stage of the lunge progression is the basic lunge; with your feet just a few inches apart, take a long enough step so that your front knee/hip can bend to 90 degrees each, and so that you can drop your back knee at a 90 degree angle. Step back to the starting position, and perform with the other leg. Do about 10 on each side, twice, as a general starting point.  Do not continue in the presence of any pain associated with the exercise. Wait a day or two, and if you do not have significant soreness, then progress to the next stage. 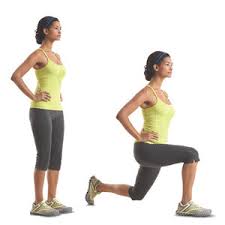 The second stage involves the same movement, but instead of returning to the starting position, step forward with the back leg into a lunge on the opposite side, like you are walking. Continue like this for ~20 meters, and then turn around and come back.

The third stage involves holding weights in your hands while performing the lunge-walk as in the second stage.  Hold your arms down at your sides so that your legs have to absorb more force. Weights should be 10 lbs or less. 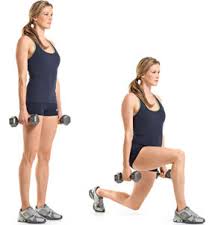 The fourth and final stage of this exercise progression involves holding one of the weights you used in the previous stage and holding it at the center of you chest. As you lunge forward, rotate your upper body with the weight towards the forward leg.  Do this with control and do not let your leg position change. 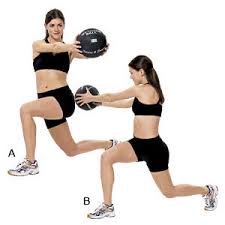 This exercise demands proximal muscle control of the hip and trains deep knee flexion positioning and strength. Deficits in these areas are also associated with ACL injury, so this progression is useful for anyone that is participating in sports with high incidences of ACL injury, such as skiing.

Next week, we will feature the lunge jump to take this exercise one step further and begin plyometric training.

1 Response to Exercise of the week: Ski Conditioning Series