Exercise of the week: Clamshell Progression

Many of you may have heard of the “clamshell” exercise, or perhaps even been given this exercise in physical therapy. Clamshells primarily target the external rotators of the hip, which include the gluteus maximus and a number of smaller muscles (see photo below for names), which help to stabilize the knee and prevent excessive internal rotation of the hip. Excessive hip internal rotation is associated with increased stress at the knee and subsequently knee pain, so exercises that strengthen the external rotators are frequently utilized for patients with knee pain.

The basic clamshell exercise is typically performed in a sidelying position with the hips flexed to ~45 degrees and the knees flexed to ~90 degrees. The ankles remain in contact, and the top knee is rotated upwards, keeping the pelvis level.

The clamshell progression begins with the basic clamshell, as described above, and then progresses through a sequence of three more variations. Each variation recruits the gluteus maximus and also begins to increasingly recruit the gluteus medius, another important muscle in stabilizing the hip in a weightbearing position, and one that also plays an important role in reducing stress through the knee.

The first progression after the basic clamshell is performed in the same position but instead of maintaining the ankles touching, you maintain contact between the knees (see photo below, top right). The next step is to elevate the top leg and perform the same motion as the one before, rotating the top leg up towards the ceiling (bottom left). And finally, the last progression is to extend the top leg so it is in line with the body, and again perform the rotation that you did in the previous two (bottom right). 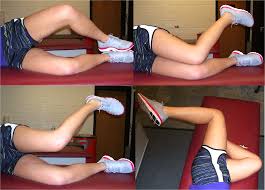 You should feel each of the exercises deep in the muscles outside of the hip. You should be able to perform 10 repetitions of each step without much difficulty before you move onto the next one.

This exercise is a good one to wake up the hips, strengthen the external rotators and the glutes, and prepare you for more functional exercises in weightbearing positions.