Ask a PT: My knee hurts, should I try barefoot running?

This weeks question is one that comes up a lot, especially since Christopher McDougal’s “Born to Run” book came out in 2009. The question is, “my knee hurts when I run. I have heard that switching to running barefoot, or with a minimalist shoe, will help with this. Should I switch my shoes?”

The answer to this question is not a simple yes or no. Proponents of barefoot running argue that this style of running is a more natural way for humans to run, and is the way humans ran long before running shoes (or any real shoes at all) came out. When a person runs without shoes, or with a very minimally-supportive shoe (called a “minimalist” style shoe), they tend to strike the ground with the forefoot instead of the heel. The majority of runners these days, especially those who wear supportive running shoes, strike with the heel first. A forefoot strike minimizes the impact on the passive structures of the body, such as the joints, and transfers that force to the active structures, such as the muscles and the tendons that they connect them to the joints. For example, a person that tends to strike the ground with their forefoot rather than their heel will likely have less force absorbed at the knee but increased force through the achilles tendon and gastrocnemius-soleus muscles. 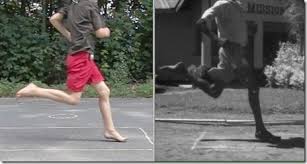 So with that knowledge, you might be thinking that it makes sense to switch to a minimalist-running style if you have knee pain with running, right? Well, its not that simple. Changing your running style can be a risky endeavor, and you run the risk of overuse injury in parts of the body that are not used to certain stress, such as the achilles and certain joints and tissues in the forefoot. Although it is true that forefoot striking is a natural way to run when the shoes are removed, it is also important to remember that in our society, we were raised in shoes. So what was natural to humans thousands of years ago, and what is relatively natural to some humans in less developed parts of the world, like Kenya and the northwestern part of Mexico known as Sierra Madre where the Tarahumara live (the native group of Mexicans that McDougal writes about in his book, and who are known for their long-distance running prowess), is not as natural to those of us that have been raised to walk and run in supportive shoes. This is not to say that either type of shoe (supportive or minimalist) is good or bad, but it is important to recognize that we may not possess the adequate strength, proprioception, and motor control that is necessary for barefoot activity. Think of it as being “out of shape.” If you have not lifted weights ever in your life, you are not going to start with 100-pound deadlifts. You need to ease your way into it so that your body is able to adapt and you do not get injured. It is the same with barefoot running. If you decide that you want to try it, you must first spend time walking around barefoot. Do this for several weeks, building up to several hours a day. After you are able to walk barefoot without soreness for a considerable portion of the day, then begin a strengthening program performed without shoes. You can begin with a double leg squat, lunges, progressing to a single leg squat (http://ascentpt.blog/2013/10/23/exercise-of-the-week-single-leg-squat/), and eventually to hopping back and forth. 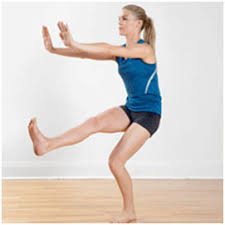 So to answer the question posed above, my opinion is “maybe.” If you are a runner already and have knee pain, it may benefit you to transition with extreme caution to a forefoot-strike. If you are a runner who has no pain, keep doing what you are doing would be my advice. If you are not a runner and are thinking about becoming one, and are serious about trying barefoot or minimalist running, you would benefit from consulting a professional, such as a physical therapist or running specialist, before you begin.